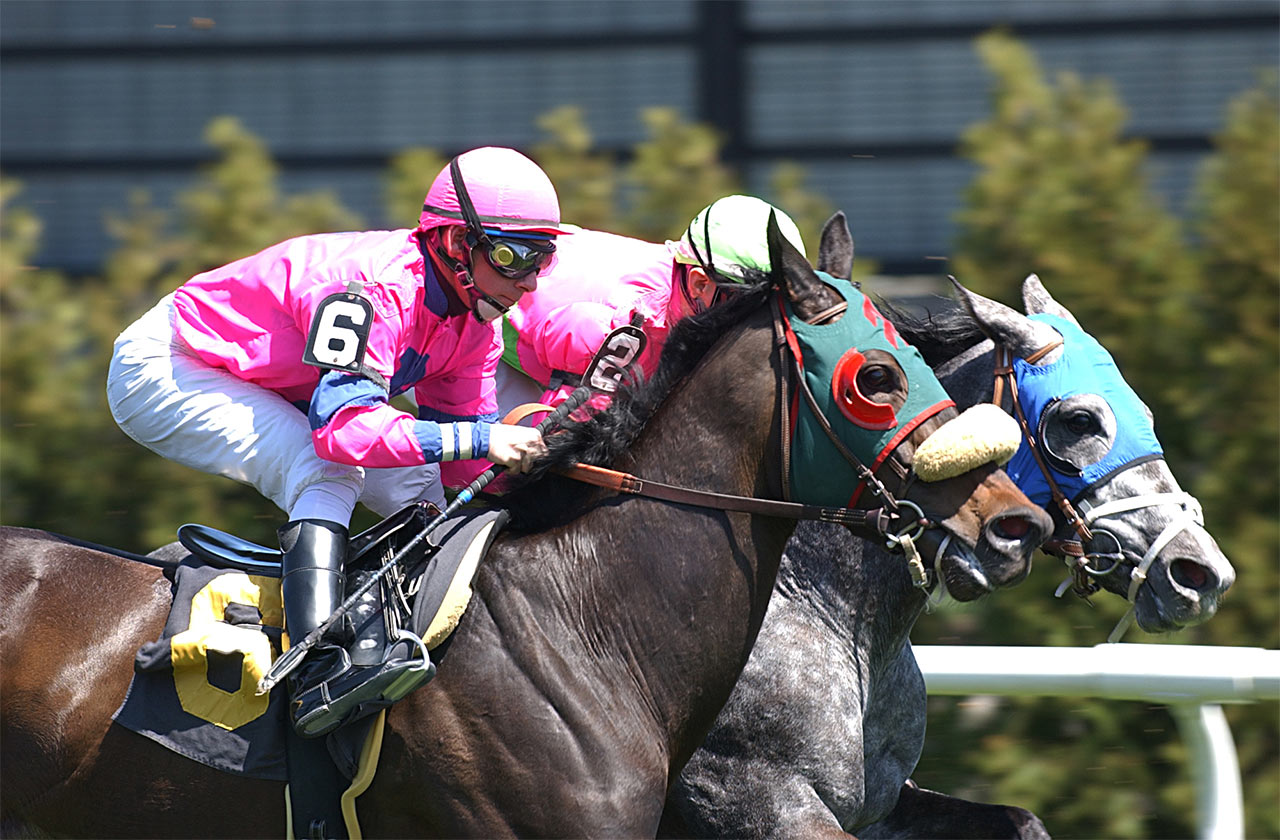 You could argue that Aqueduct Racetrack has two birthdays, not one. Opened September 27, 1894, the original track was a utilitarian kind of place, even in the choice of its name. Operated by the Queens County Jockey Club, Aqueduct was named for its location: a property in South Ozone Park, Queens on which a conduit belonging to the Brooklyn Water Works delivered water to New York City from the vast Hempstead Plain.

At the time, the future looked challenging for Aqueduct. New York was full of fledging tracks, from Gravesend Race Track and Sheepshead Bay Race Track in Brooklyn to the more glamorous Morris Park Racecourse in the Bronx and upstate at Saratoga. But from the get-go, Aqueduct seemed to find a way, as in 1895 when a wealthy tugboat skipper, Captain William Carter, endowed the track with a significant amount of money to stage a major race. The appropriately named Carter Handicap, still run today, enabled the Jockey Club to begin drawing top horses, and it helped turn a bare-bones track into a respectable, long-term racing attraction.

Fast forward to September 14, 1959 when 42,473 fans including New York Governor Nelson Rockefeller helped to inaugurate the “new” Aqueduct, quickly dubbed “the Big A,” after a three-year $34.5 million renovation project that featured a new four-tier grandstand. Designed by the renowned track architects Arthur Froehlich and Associates of Beverly Hills, California, the remodeled track was state-of-the-art for its day from the 18 escalators and elevator to 20,000 seats and another 14,000 in air-conditioned restaurants and lounges. The Associated Press called it “the world’s most modern and luxurious horse plant.”

From 1963 to 1968, Aqueduct hosted the Belmont Stakes during the reconstruction of Belmont Park. On November 6, 1973, Secretariat was retired at the track; ridden by Ron Turcotte, he paraded before 30,000 fans before leaving racing for his new life at Claiborne Farm in Kentucky. And on October 6, 1995 a day fortified by brilliant sunshine and a cloudless blue sky, Pope John Paul II said mass before a crowd of 75,000 at Aqueduct.

Aqueduct’s Wood Memorial Stakes has long been New York’s premier preparation for the Triple Crown, with the majority of winners going on a month later to the Kentucky Derby. While 11 Wood Memorial winners have gone on to capture the Kentucky Derby, several other thoroughbreds have done the opposite: failing to take the Wood and then winning the Derby. Secretariat—yes, Secretariat—finished third in the 1973 Wood. Meantime, four Triple Crown winners were also Wood champions: Seattle Slew (1977) as well as Assault (1946), Count Fleet (1943) and Gallant Fox (1930).

Aqueduct has undergone a steady series of embellishments through the years. In 1975, it opened its winterized, one-mile inner dirt track on the former site of the inner turf course; and on October 11, 1981, it unveiled one of the largest restaurants in New York City, the multi-tiered Equestris. In 2011, the Big A underwent perhaps its most sweeping change with the opening of the multi-level, 415,000-square-foot casino, Resorts World Casino New York City, operated by Genting New York LLC. The casino, which occupies the former grandstand, opened in October 2011.

What endures at New York City’s only race track is some of the best autumn and winter racing in the U.S. In the meantime, the New York Racing Association continues to add new features to the track, including in 2014, Longshots, the 24,000-square-foot state-of-the-art sports bar and simulcasting facility.

Also in 2014, the track hosted a series of artists who added color inside and outside the Grandstand with a series of racing-themed murals, many of them tied to the greats who raced there. A giant 60-foot-by-80-foot rendering of Secretariat and his jockey Ron Turcotte, on the east side of the Grandstand has become a landmark visible from the Belt Parkway. Other smaller murals that include renderings of the great filly Ruffian and various track scenes, dot the grandstand and clubhouse areas, adding splashes of color to a facility where history and excitement are always on display.

They Called It: A Celebration of NYRA Race Callers

A salute to some of the giants of the announcer’s booth, who have conveyed the magic and pageantry of racing at NYRA tracks for more than 90 years.

“(He was) a joyous, jovial, verbose and vibrant man who was absolutely certain that he was the best broadcaster of horse races who ever lived. He would have resented being called an egotist. In his ebullient way, it never occurred to him that he could be wrong about anything. Usually, he wasn’t.”

Bryan Field was a sportswriter covering boxing, baseball, and track and field when The New York Times named him its turf writer in 1928. Knowing little about horse racing, he caught on quickly by taking a second job as a stablehand, arriving each dawn at the track to groom and hot-walk horses. By 1931, Field had mastered racing well enough to launch a broadcasting career—calling the races at Belmont Park and other New York tracks, and eventually broadcasting the Triple Crown, on radio and then television, through 1962.

“I try to avoid hysteria. My job is that of a reporter.”

Legend has it that in 1991 Fred “Cappy” Capossela said to his son, “It is now post time,” and died a short time later. How fitting that Capossela used the signature phrase he made famous as NYRA’s head race caller for 37 years and as the “Voice of the Triple Crown” from 1950 to 1960 on CBS Television and Radio. Capossela’s commanding knowledge and cadence were standards at NYRA tracks from the 1930s through his retirement 1971; so were his prodigious memory and unerring accuracy. Capossela said he never called the races by numbers, but by memorizing the colors of the silks—thousands of them each year.

Charles “Chic” Anderson, the voice of NYRA from 1977 until his untimely death in 1979, was the voice of the Triple Crown and generally acknowledged as the best race caller of his time. Before joining NYRA, Anderson called races at Churchill Downs, Santa Anita and Oaklawn, among others.

“And down the stretch they come!”

Dave Johnson’s signature call during his tenure as NYRA race caller from 1972 to 1977 was straightforward and dramatic, and is still among the most recognizable calls in sports. Johnson portrayed himself as Belmont Park’s race caller in the 2007 film Ruffian.

“Headed into the stretch … Conquistador Cielo has complete control of this field by about five lengths. Linkage (is) on the outside, High Ascent on the inside, those two now heads apart. Gaining ground on the rail is Illuminate. On the outside, here comes Gato Del Sol. But they’re far as Conquistador Cielo (has) complete control of this Belmont Stakes (and) has the field by 15 lengths, maybe 20 lengths! Gato Del Sol is second.”

– Marshall Cassidy calling the stretch run of the 1982 Belmont Stakes –

Throughout the 1980s, Marshall Cassidy was the silky-smooth voice of NYRA, noted for his accuracy and even-keeled delivery. “There is a lot of emotion of what he is seeing,” Cassidy once said of the typical racing guest. “He doesn’t need to hear a cheerleader whooping it up for horse he hasn’t bet on.” Cassidy later worked as a racing steward.

“Smarty Jones enters the stretch to the roar of 120,000! But Birdstone is gonna make him earn it today! The whip is out on Smarty Jones! It’s been 26 years; it’s just one furlong away! Birdstone is an unsung threat! They’re coming down to the finish! Can Smarty Jones hold on? Here comes Birdstone! Birdstone surges past! Birdstone wins the Belmont Stakes!”

It was said that Tom Durkin’s calling was calling races. While there isn’t much debate that Durkin is among the best race callers in history, race fans prefer to discuss their favorite Durkin call.

Some cite the famous Belmont Stakes 2004 stretch run, referenced above. For others, it’s the call describing Rachel Alexandra’s stirring victory in the 2008 Woodward Stakes. Or it’s “Arrrrrr”—the name of a horse and not a misprint. Or it could be “Yakahickamickadola” from a 1989 Durkin call at Hialeah Race Course—the pronunciation changes throughout the race—which became a YouTube hit.

According to estimates, Durkin called 80,000 races in his 43-year career, 24 of which he spent at NYRA. From 1984 to 2005, Durkin called races at the Breeders’ Cup, and from 2001 for the next decade, gained further fame as the voice of the Triple Crown. Less known was his long-term commitment to the Backstretch Employees Service Team as a board member, fund raiser and regular bingo-night caller. For his career-long dedication, Durkin was awarded the Eclipse Award of Merit in 2015.

NYRA’s race caller from 2014 to 2020, Larry Collmus is the voice of the Triple Crown on NBC. An NBC Television audience of 22 million caught his epic call in the 2015 Belmont Stakes in which American Pharoah captured the first Triple Crown in 37 years.

“In a sense, this is a job for which I’ve been preparing for years. I’ve been so lucky to be surrounded by incredible race callers during my career. I learned from all of them and these lessons live with me to this day.”

Horse racing does not have a sixth man award like the NBA, but if it did NYRA would have named it after John Imbriale. Starting at NYRA to 1979 when he won a New York Daily News contest which gave him the opportunity to call a race and work with the NYRA press office, Imbriale has been an invaluable jack-of-all-trades.

Imbriale became Tom Durkin’s backup in 1990 and has since been part of NYRA’s race-calling team at all three tracks ever since. Along the way, the Queens native took on other responsibilities at NYRA, working with Harvey Pack on the popular Inside Racing program, and also behind the scenes in a variety of roles within NYRA TV, most recently as NYRA’s Director of Television Production.

“Frank Wright, Charlsie Cantey, Harvey Pack, Marshall Cassidy, Tom Durkin … I learned from all of them,” said Imbriale. “Tom taught me that the race makes the call. It’s not the other way around. He also told me not to listen to him calling a race because he believed it was important for a race caller to have his own style.” 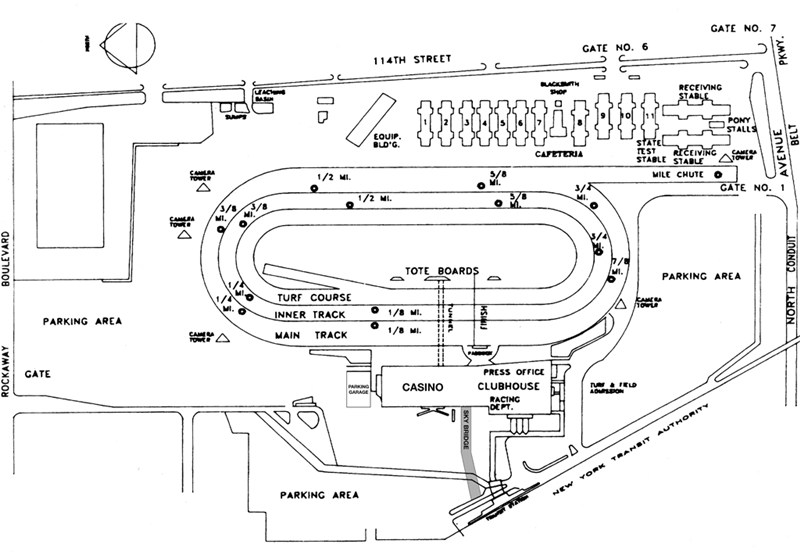